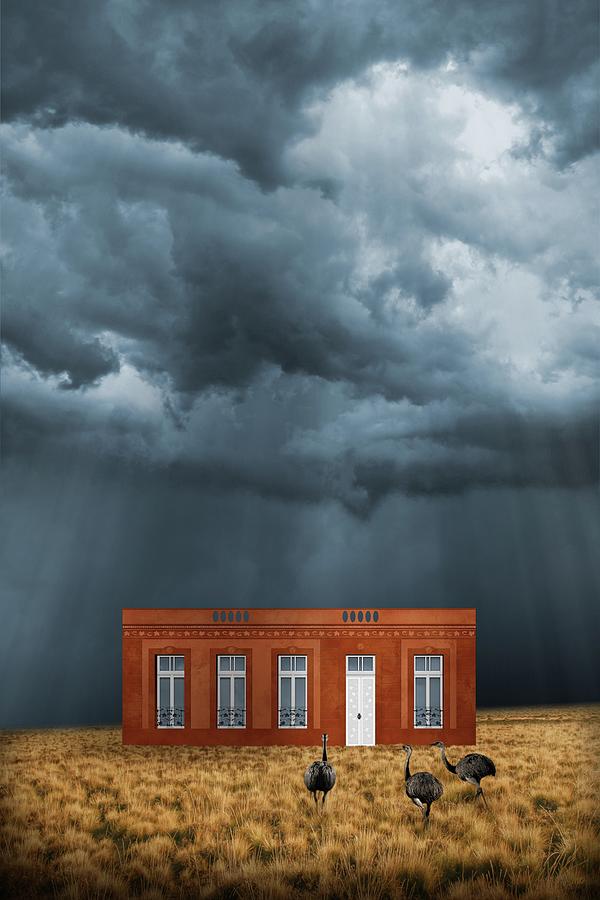 Casa chorizo - lonely house in heavy storm on the Pampas

Casa chorizo - lonely house in heavy storm on the Pampas

'Casa Chorizo' - a traditional townhouse in secessionist style from Buenos Aires, set in the middle of a heavy storm on the Pampas of Argentina, with three curious nandus approaching the building.

Casa Chorizo was a traditional townhouse type in Argentina – mainly in the Buenos Aires region – around the turn of the 20th century. The name refers to a special Spanish pork sausage that is very popular in the country – the layout of the building usually forms a U or L with a patio behind the main rooms that are looking to the street, and the bedrooms along the patio follow each other like the short pieces of the sausage chain. While the layout and the main structure and ratios of the buildings were very similar, the architectural style and decorations of the facade reflected the taste of the owner – from neoclassical to art deco.

This image is one of the 12 pieces from my collection titled Runaway Houses. The series portrays imaginary old buildings in different historic architectural styles from all around the world - but instead of their original urban environment they are placed in a natural setting that is typical in the neighbourhood of their place of origin.
The series was inspired by one of my favorite books from my childhood, a story of Norwegian writer Tor Age Bringsvaerd about an old house that is rescued by birds from demolition.
All pieces are available here as framed, acrylic and metal print in different sizes.
If enabled on a product (puzzle, phone case etc.) you can customize the crop of the print according to your personal taste during the ordering process.