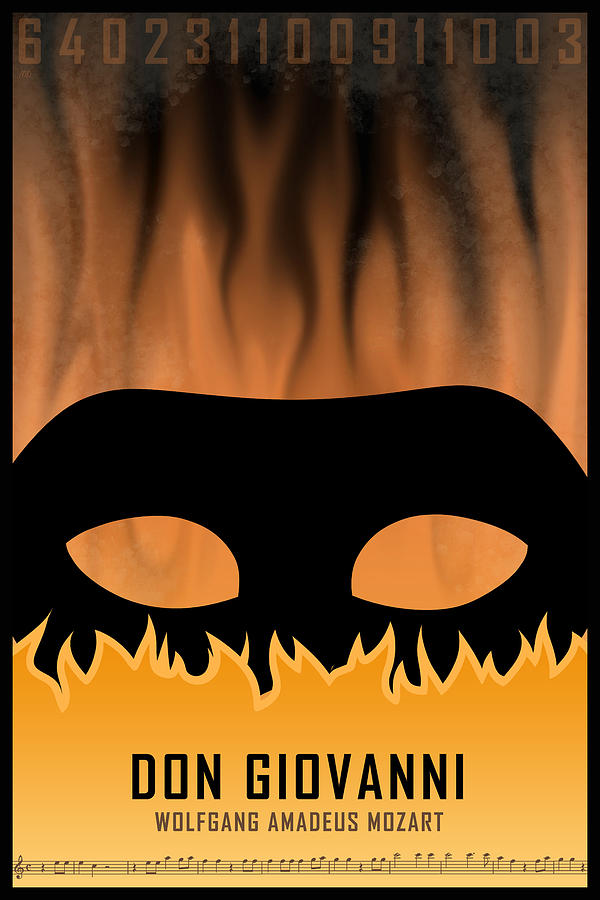 Mozart's masterpiece is considered by many as one of the greatest operas ever written, it has inspired dozens of writers, composers and philosophers from Franz Liszt to Kierkegaard.

The story is based on the legends of Don Juan, a fictional Spanish libertine and seducer - Mozart's opera focuses on the second aspect. His Don Giovanni is a womanizer with no respect to society's rules and lacking basic human decency, who refuses to repent his acts even when threatened by the flames of Hell in the last scene.

The sheet music at the bottom of the poster is from Leporello's (Don Giovanni's servant) famous aria 'Madamina, il catalogo è questo', a detailed description of his master's numerous conquests. The numbers at the top of the poster are also a reference to these conquests:

In Italy, six hundred and forty;
In Germany, two hundred and thirty-one;
A hundred in France; in Turkey, ninety-one;
But in Spain already one thousand and three.

This poster is part of my continuously augmented opera-themed poster collection featuring the works of Mozart, Verdi, Puccini, Wagner, Rossini and other great composers. All pieces are available as high quality framed, acrylic, metal or canvas print in different sizes.