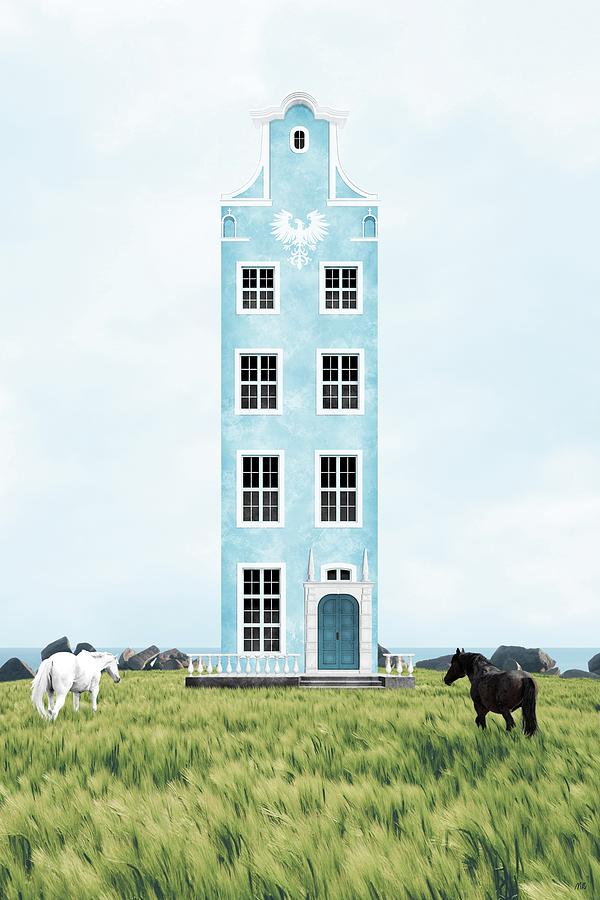 'The Dream of the Blue House:' - A colorful medieval townhouse with blue door from Gdansk, Poland - set on a barley field along the shore of the Baltic Sea, with a white and a black horse approaching the house.
Colorful houses with similar architectural features – the style originated in the Golden Age of the Dutch empire – were built in many cities during the 17th and 18th centuries through Northern Europe. The wars of the 20th century destroyed many of these buildings but in most big cities at least some survived in the old town areas.

This image is one of the 12 pieces from my collection titled Runaway Houses. The series portrays imaginary old buildings in different historic architectural styles from all around the world - but instead of their original urban environment they are placed in a natural setting that is typical in the neighbourhood of their place of origin.
The series was inspired by one of my favorite books from my childhood, a story of Norwegian writer Tor Age Bringsvaerd about an old house that is rescued by birds from demolition.
All pieces are available here as framed, acrylic and metal print in different sizes.
If enabled on a product (puzzle, phone case etc.) you can customize the crop of the print according to your personal taste during the ordering process.